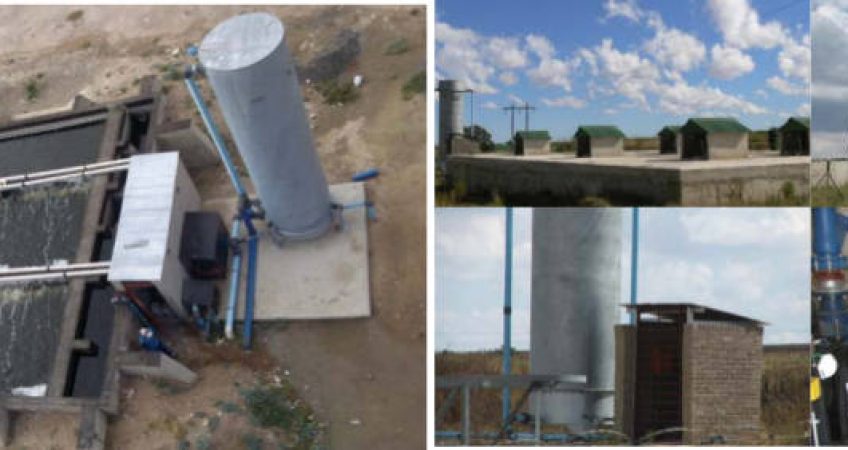 Municipalities with limited water resources were forced to fi nd water-efficient technologies that could enable them to meet the December 2007 target date for the eradication of all buckets.

Provinces such as the Free State were faced with a huge bucket sanitation backlog, coupled with the com
munity rejection of dry sanitation technology options such as VIP toilets.

Tokologo Municipality, when faced with this challenge, took a decision to pilot the losed-circuit wastewater treatment and recycling sanitation system as a means of providing households with recycled water to fl ush their toilets because the community of Seretse Township rejected VIP toilets as a replacement for buckets.

Owing to the community rejection of the VIP toilets as a replacement for the bucket system, the Tokologo Local Municipality (LM) introduced the closed-circuit grey water system as an alternative source of water for fl ushing the toilets. The advantage of the system was that it did not require the
development of new water sources, which would have been very costly and therefore unaffordable for the municipality.

The WWTW was completed in early 2010 and has been in operation for more than a year in Seretse Township in Boshof. Currently 500 households are connected to the system. It was implemented as a pilot project supported through a partnership between the Department of Water Aff airs, the Department of Cooperative
Governance and Traditional Aff airs and Tokologo LM.

TDB & C Agency was appointed to implement the closed-circuit wastewater treatment and recycling plant. The plant has a design capacity for 3 000 households, but the current project aims to connect 1 000
households and the spare capacity will be used to connect future housing development in this township. The Tokologo pilot project provided the opportunity to document the experience of implementing a new sanitation technology that could benefi t other municipalities that are under political pressure to provide communities with waterborne sanitation systems under the difficult conditions of water scarcity.

It also shows that it is possible to implement innovative technology that provides a higher level of service, without an increase in water demand. The closed-circuit wastewater treatment system is designed to maximise the reuse of treated waste water indefi nitely, without the need to use potable water to flush toilets.

The closed-circuit wastewater treatment system is an extended aeration variation of the activated sludge technology. 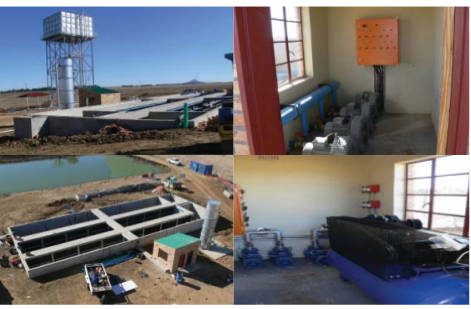 This system operates by collecting wastewater from the households that are connected to the closed-circuit wastewater treatment through two manholes into the waste tank. A sieve between the tank and the manholes allows only water to enter the tank, while the solid waste remains behind.

This sieve does not allow all the wastewater to pass through into the tank and this is done so that the solid waste that is caught up in the sieve can be washed off and drained back into the two manholes.

The wastewater receiving tank is rectangular in shape, with approximate dimensions of 7 m wide and 2.5 m deep, and it has a total volume of 500 m 3 . It is fitted with five blower aeration systems producing
645 kg/d (27 kg/h) of oxygen with a capacity of 18 kW, i.e. 5 x 4 kW. The aerobic reactor consists of 12 three metre air units with sludge return accomplished by 12 upflow draft tubes. Six draft tubes (18 m) return the mixed liquor from the second aeration compartment back to the first reactor.

Raw water is taken from the main inlet works at the existing treatment plant via a 160 mm PVC pipe at the existing splitter box. The volume extracted is 500 m 3 /d over a 24-hour period. A vertical bar screen removes the approximate amount of 15 l for screening per day and is equipped with a removal unit. A computerised mechanical system adds chemicals into the tank from the adjacent chemical storeroom.

The screen and venture system is constructed of 5 mm uPVC and is embedded into 75 mm concrete while 110 mm uPVC pipes transport the fl ow to the different compartments of the reactor.

Air is introduced into the reactor with a 20-hour retention time by means of six air blowers, which are equipped with timers so that the creation of anoxic conditions in the reactor can be obtained.

A zone is established where aerated mixed liquid comes into contact with raw inflow and allows a retention time of 6.5 hours. This zone allows for the utilisation of nitrate as a source of oxygen for
biological processes.

The settling tank is designed with an 11 hour retention time and a patented rapid reactor activated sludge system. The clarifier is square with a cone-shaped base for returning settled sludge at a rate of 3 x ADWF without any recycling pumps.

A waste sludge pump is situated adjacent to the clarifi er with a storage capacity of 25 m.

The waste sludge is deposited and treated in an oxidation pond with a minimum depth of 2.0 m to ensure that anaerobic conditions are achieved.

A chlorination basin is also provided adjacent to the clarifi er and it allows for a retention time of at least 30 minutes.

TDB & C Agency has successfully implemented similar projects for the Nketoana Municipality in the Free State for 3 500 households, with the Tweespruit and Hobhouse towns currently under construction. Similar projects have been completed at 39 schools and three clinics in the Free State, a police station in Limpopo, with an additional two currently in the planning phase, as well as another 16 schools in the Northern Cape.